Freshwater crabs are found in the tropics and subtropics in most parts of the world. Out of a total of 6,700 species, there are more than 1,300 described species of freshwater crabs, and many more currently unknown to science. The IUCN Red List has assessed all described species as ‘data deficient’, as data on their ecology, reproductive biology and habitat requirements is lacking. Interestingly, 32% of the species for which data are available are threatened with extinction.

TropWATER scientists are investigating the biology and ecology of these remarkable freshwater species across the tropical regions of the Torres Straits and northern Australia, for which so very little is known. They have an amazing lifecycle, because they estivate during the winter dry season, underground, where they will wait for the next season rainfall.  With the onset of rain, these crabs emerge from the creek banks presumably to access food and reproduce.

Already, Dr Waltham has been the first to document that the females of the common Inland Freshwater Crab (Austrothelphusa transversa) carry their young under their abdomen underground during the dry season. When waterholes refill during the wet season, and more food is available, the young crabs leave their mother, growing up quickly before the next dry season. 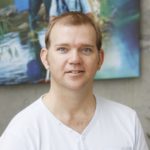