TropWATER researchers have led a new review describing how to better use a revolutionary DNA technique in the tropics, so scientists can more effectively identify invasive, elusive and rare species.

“It’s no exaggeration to say that eDNA sampling is a revolutionary technology, it’s completely opened up the field of biology and is a massive boost to those working in biodiversity conservation,” she said.

The technique involves taking a sample (usually filtering water from a stream, river or the sea) and analysing it for trace elements of the DNA shed by living creatures. Scientists are able to accurately tell, from a single sample, which fish live in a waterhole or which terrestrial animals have visited it.

“There are some special challenges to using eDNA analysis in the tropics and we wanted to explain what they were and suggest ways to overcome them,” said Ms Cooper.

“All of this has a detrimental effect on the use of eDNA techniques. What we have done is lay the groundwork for how this might be overcome,” she said.

“The eDNA samples generally do not capture data for age, size, and reproductive status, so if we want this information we still need to use traditional visual assessment methods.”

Dr Villacorta Rath said one of the crucial uses of the technology was in combating the spread of invasive species.

“Detection programs are only successful when detection is early. Environmental DNA is a great tool, but it has to be used properly. Early detection of invasive species still requires constant monitoring and rigorous surveillance over large areas,” she said.

Ms Cooper said biodiversity research and conservation management would be transformed in the tropics if eDNA methods and traditional biodiversity field studies were successfully blended.

Main recommendations of the research: 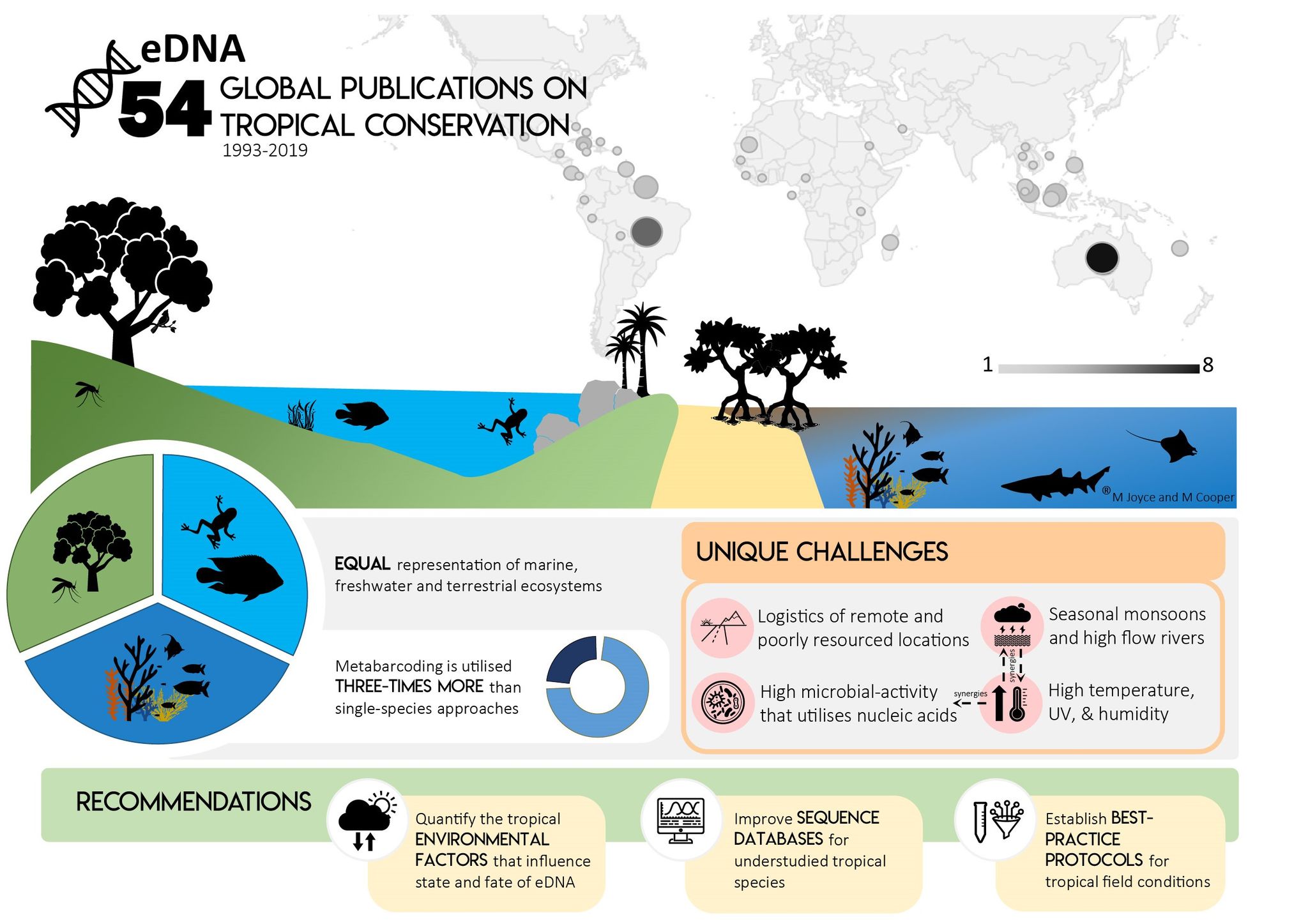 TropWATER Member and OzFish Unlimited project manager for north and far north QLD, Dr Geoff Collins has been working with the Cairns OzFish Chapter, as well as local government and other community groups to improve the health of local waterways. This includes delivering community education and citizen science projects. OzFish recently ran two community events that were well attended by the local communities and resulted in the successful removal of invasive fish species from urban waterways. Both events were well supported by local councils (Cassowary Coast Council and Townsville City Council).

Locally in north Queensland things are progressing – Dr Collins has recently been working with community group NQ Dry Tropics to monitor the movement of fish through vertical slot fishways in the lower Burdekin. Fish monitoring was undertaken in February and captured the period of high flow that occurred immediately after high rainfall. Dr Collins will soon be calling on local fishers to help with further fish surveys in tropical urban systems, in an effort to better understand how fish use modified urban waterways and to identify how they can be better managed to meet the requirements of urban runoff while still providing valuable fish habitat.

OzFish is on the lookout for new members locally to support their project work. To find out more go to: www.ozfish.org.au or get in touch with Dr Collins directly on geoffcollins@ozfish.org.au or 0427 992 567.

Herbicides are an integral part of global agricultural activity but can be advected into local drainages that can discharge to coastal marine systems. Herbicide runoff can impact coastal marine organisms, including those associated with coral reefs and coastal mangrove forests. In this study, the symbiotic sedentary jellyfish Cassiopea maremetens were exposed to analytical grade hexazinone to determine their sensitivity and potential for recovery after exposure to a press herbicide event of 14 days followed by a recovery period of matching duration. Bell surface area, photosynthetic yield (i.e. effective quantum yield, EQY), statolith count and zooxanthellae density were analyzed. Most metrics demonstrated significant decreases when exposed to higher concentrations of hexazinone, while EQY was significantly decreased at exposure concentrations from 31 μg/L hexazinone and above. In contrast, zooxanthellae density (cells/mm2) increased in the highest concentrations compared to control animals. At the end of the exposure period the EC50 for bell surface area, EQY, and statolith count were 176 μg/L, 81.96 μg/L, and 304.3 μg/L, respectively. Jellyfish were able to recover to similar start values for all measured metrics at the end of the 14-day recovery period, with EQY showing recovery by Day 7 of the recovery period. This study demonstrated that statolith counts as an estimate of age were not affected by herbicides. We conclude that the depressed metrics from herbicide related impacts of C. maremetens are effective indicators of a relatively recent herbicide perturbation in that the recovery timeframe for these jellyfish is relatively short.